The power of cyclic production 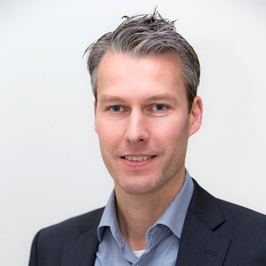 What is cyclic production?

According to the dictionary, a cycle is a “period, time circuit, characterized by the same sort of events”. The word cycle is stemming from the Greek word “kúklos”, meaning wheel, circuit, circular course. When designing a cyclic production system, a period is defined wherein the same products are produced in a fixed sequence. The next picture is an example of a production cycle. 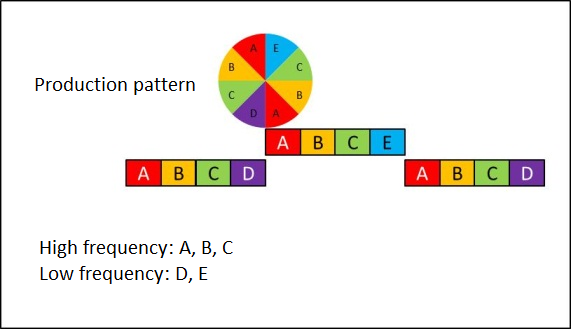 The advantages of cyclic production

A repeating cycle provides many opportunities for optimization. Numerous repetitions result in a strong learning curve in the organization. Just imagine, every time again an identical production plan that you communicate to your shop floor and your suppliers. Every time the same sequence in change-overs of your resources, similar events at equal time intervals, (almost) equal quantities in the cycle, etc. The list of potential advantages is long:

Moreover, cyclic production can prevent interference. Interference is when a number of products are requiring the same production resource at the same moment in time. The consequence is large, unreliable lead times. A fixed cycle evades these issues by tuning workload in line with the resource capacity. In many manufacturing environments these benefits from repetition will prevail over the advantages of flexibility.

Which items qualify for production in a cycle? Perhaps you think that only a small, selected group of items can be considered. The opposite is true. You can select your items by taking certain product characteristics into account. The demand pattern is especially important. Items with limited demand variation are clear candidates. The small spread around the average demand makes it quite easy to determine a fixed production quantity. This, combined with a relatively low safety stock, will lead to a proper service level. The good news is that in most companies, many items fall into this category. By far, most fast moving items have such a limited demand variation. For example, if the fast moving items make up for 80% of the volume, then the bulk of your product flows could be produced in such an efficient cycle! Toyota goes very far with this. They produce items with low demand fluctuation in a completely Fixed Repeating Schedule. Hereby items with limited demand fluctuation are planned in a completely fixed production cycle and items with large demand fluctuations are placed in a fully separated flow. This opens up the possibilities to exploit the ‘Economies of repetition’ to the full with the large flow, with next to it a very flexible operation for the non-cyclic production.

But, also for the items with significant demand fluctuation there are opportunities to include them in a cyclic production pattern. With this comes the challenge, because demand is fluctuating, to align production quantities with demand. This can be done by using capacity stock. When using capacity stock, during times of low demand, certain pre-defined fast moving items are produced somewhat more and during busy periods somewhat less. This enables cyclic production also for items with high demand fluctuation.

In brief, enough reasons to take a closer look at your production concept. Would you like to know more about developing a production cycle or improving your production planning more in general? Please contact Leon van Os, senior consultant at Involvation, l.vanos@involvation.nl.