Service is a choice

In an edition of the Dutch newspaper Het Parool dated 17 February 1967 I came across a full-page advertisement in which the high-end Amsterdam department store De Bijenkorf proudly announced its 26 (!) collections per year – ‘fast fashion’ way ahead of its time.

In fact, it took until the start of this century before fast fashion really achieved a breakthrough, stimulated by labels such as Zara and H&M. So what went wrong for De Bijenkorf in the late 1960s?

My hypothesis is that although De Bijenkorf’s commercial department understood the added value of fast fashion for its customers, the retailer’s back end – its NPD process and supply chain – were far from geared up for it. 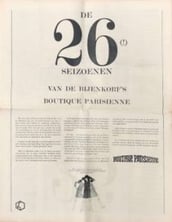 Which is not really surprising. After all, to deliver on the promise of 26 collections per year you need to be very competent at managing the associated risks of too much or too little stock. Otherwise, you leave yourself wide open to overcrowded stockrooms and dissatisfied customers.

In those days, De Bijenkorf’s time to market was probably around six months. Imagine having to precisely forecast how much of a new product you will sell six months down the line…that’s no mean feat.

Today’s successful fashion retailers are aware of the importance of speed and flexibility, and know how to achieve those objectives through conservative procurement (consistent under-buying), strategically placed (local) overcapacity, vertical integration, specialisation and postponement, among other things.

Furthermore they know when responsiveness matters less, and that’s where they make their efficiency gains. The result is high customer value at low costs, thus resolving the service paradox. It turns out that service is a choice rather than a trade-off.